Who Gon Stop Me?

Every year you hear resolution after resolution being made. I've never been big on them. However, I do make running goals and for the most part stick with them each year. I don't get too upset when I don't beat my PRs... But not to brag I do "make it happen". Here's my run down from 2013:

Obtained! I ran 10 races, cut it real close by fitting in the WalkB4URun virtual run on December 21, 2013. One thing I learned is that I will NOT be making that a goal again. I'll stick to a few races... Maybe a half, a full and whatever 5Ks and 10Ks I can feel accomplished in. Which gets to my new goal: Only run races with cool t-shirts. iKid :)

Obtained? I didn't actually run a "true" half marathon, but I did run 2 marathons! So I'm counting the 1:59:24, I clocked in the Detroit Marathon. Money! New goal: to run a real half marathon... Kentucky Derby here I come!

Fail! This one didn't happen... I was sooooo on track during the race for even a sub 4! But then mile 20 hit. Ooops. But it made me feel good for my next one. I'm so ready for my New goal: Sub 4 marathon.

Obtained! I completed it as yo 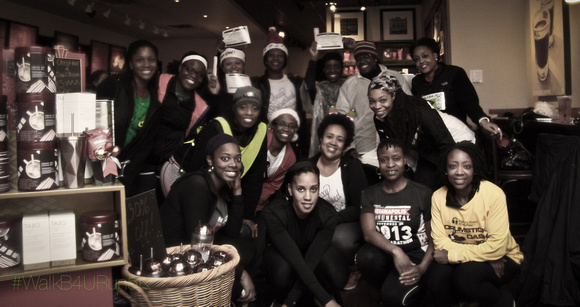 u might have heard in my previous entry. So this year the new goal is just to be consistent by running 1400 miles in 2014!

Which leads to my final goal. Continue to be active in my running club - Black Girls RUN! Indy.  These ladies have been such an encouragement to me over the last few years, I hope I can be that for them as well! If you haven't heard of the group, look them up at www.blackgirlsrun.com. No matter If you are interested in getting into running, walking, jogging, wogging (yeah that's a thing) just get active! There's even a Black Men Run group as well! But I'm excited for this year and all of the amazing opportunities that are being presented.